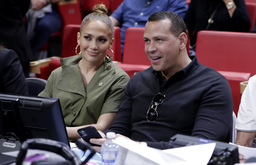 NEW YORK (AP) Alex Rodriguez, once again, wants to be like Derek Jeter.

A-Rod and Jennifer Lopez, who are engaged, have retained J.P. Morgan to represent them in raising capital for a possible bid for the New York Mets. The move was first reported by Variety and confirmed to The Associated Press by a person familiar with the decision who spoke on condition of anonymity because it was not announced.

A three-time AL MVP, Rodriguez retired in August 2016 with 698 home runs, a .295 average and 2,086 RBIs in 22 years. He was suspended for the 2014 season for violations of Major League Baseball's drug agreement and labor contract.

A-Rod, now 44 years old, earned about $448 million as a player. The 14-time All-Star started his career with Seattle, signed a record contract with Texas in December 2000, and then moved from shortstop to third base when he was traded from the Rangers to the New York Yankees ahead of the 2004 season.

Jeter, the Yankees captain and shortstop, retired after the 2014 season and was elected to baseball's Hall of Fame in January. He became CEO of the Miami Marlins as part of the team's sale from Jeffrey Loria to a group headed by Bruce Sherman in October 2017.

The Mets' ownership is headed by Fred Wilpon, brother-in-law Saul Katz and Jeff Wilpon's son Jeff, the team's chief operating officer. The team said Dec. 4 it was negotiating an agreement with Steve Cohen. The hedge fund manager bought an 8% limited partnership stake in 2012 for $40 million. The deal under discussion would have seen him acquire an 80% controlling share in a transaction that values the team at $2.6 billion, and the Wilpons would have remained in place for five years.

The sides announced the deal's collapse on Feb. 6, and the Mets owners said they intended to find a new buyer. Allen & Co. represents the Mets owners.

Given the drop in equities prices caused by the new coronavirus pandemic, the next few months figure to be a difficult time to raise money for a bid.

© 2020 by STATS PERFORM.
Any commercial use or distribution without the express written consent of STATS PERFROM is strictly prohibited.