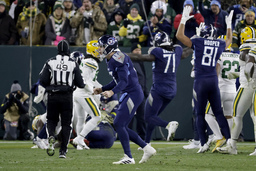 GREEN BAY, Wis. (AP) Ryan Tannehill and the Tennessee Titans showed they don't have to rely exclusively on their bruising ground attack.

With Green Bay focusing on trying to slow down Derrick Henry, Tannehill threw for 333 yards and two touchdowns to outduel Aaron Rodgers as the Titans beat the Packers 27-17 on Thursday night.

Since dropping their first two games, the AFC South-leading Titans (7-3) have won seven of eight. The Titans continued their surge by posting season highs in points and yards (408).

"We want to be a balanced attack," said Tannehill, who went 22 of 27 with one interception. "We're going to run the football. We're going to be physical, and then try to take advantage of some opportunities that arise from that in passing. I don't think the formula's any different than it's been for the past four years. Be physical, establish the run and have our opportunities in the passing game off that."

Tannehill looked much sharper in his second game back after missing two games with an injured right ankle. His performance helped the Titans improve to 10-2 when playing on short rest under coach Mike Vrabel.

"It's tough mentally, it's tough physically to turn the page on the last one and then get yourself ready to go on a quick turnaround," Tannehill said. "Like I said, on Monday we came in. We set our mind to it that there's going to be no excuses. We're going to find a way to get yourself mentally and physically ready to go and come out and win."

"Extremely disappointed right now to put on a performance like that," Packers coach Matt LaFleur said. "I don't even know what to say. It was nothing like a few days ago, and that's why you're only as good as your last game and every time you step out on that field, you've got to go out and do it."

Rodgers went 24 of 39 for 227 yards with two touchdown passes to rookie Christian Watson, a 14-yarder to close the first quarter and an 8-yarder in the third quarter. That followed Watson's three-touchdown performance in a 31-28 overtime victory over the Dallas Cowboys on Sunday.

Watson became the first Packers rookie since Max McGee in 1954 to have multiple touchdown catches in consecutive games.

The Packers limited Henry to 87 yards and a touchdown on 28 carries - a 3.1-yard average - but the Titans still did what they wanted on offense.

Henry even got into the act by throwing a 3-yard jump pass to Austin Hooper for a touchdown. Treylon Burks, the Titans' rookie first-round pick, had the best game of his young career with seven catches for 111 yards.

Tannehill's TD passes were a 14-yarder to Dontrell Hilliard and a 16-yarder to Hooper. The latter was the Titans' first fourth-quarter touchdown of the season.

"Now it's on tape," said Hooper, who scored his first two TDs of the year. "Other people have got to respect it. I'm happy we were able to execute and get a team win, but especially to get it done in the air a little bit to show the rest of the league we can do this."

Tennessee led 7-6 at the end of the first quarter and then dominated the second, running 27 plays to the Packers' six and outgaining Green Bay 91 yards to 17.

Tennessee started the quarter with a drive that lasted over 10 minutes but didn't result in any points because Quay Walker stuffed Henry for a 2-yard loss on fourth-and-1 from the 4. Tennessee had the ball for 18 plays, the Titans' longest scoreless drive since at least 2000.

But the Titans forced a punt, got the ball back on Green Bay's 41 and extended their lead to 14-6 on Henry's 4-yard touchdown run with 32 seconds left in the half. That was the first of three straight touchdown drives for the Titans.

Henry's rushing TD was his 10th of the season, the fifth straight season he's reached that mark. The other players to have at least 10 touchdown runs in five straight seasons are LaDainian Tomlinson, Adrian Peterson, Shaun Alexander and Michael Turner.

Watson's second touchdown of the night helped Green Bay narrow Tennessee's advantage to 20-17 late in the third quarter, but the Packers' offense did nothing the rest of the game. Green Bay has at best a narrow path back into playoff contention.

The Packers saluted 2022 Hall of Fame inductee Leroy Butler during a halftime ceremony that included the unveiling of his name on the Lambeau Field facade. Butler was a four-time All-Pro who played for the Packers from 1990-2001 and spent his entire career in Green Bay.

Packers: At Philadelphia in a night game on Nov. 27.