Garoppolo set to play for 49ers, Williams could be out 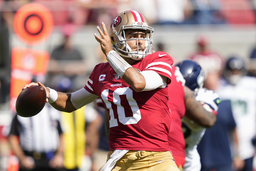 SANTA CLARA, Calif. (AP) Jimmy Garoppolo made it through the week of practice completely healthy and will start at quarterback Sunday for San Francisco but the 49ers could be missing left tackle Trent Williams.

Garoppolo left a game against Seattle on Oct. 3 with a injured calf and missed the following game. But he was able to heal during the bye week and coach Kyle Shanahan said he is 100% heading into the game against the Colts.

Niners rookie backup quarterback Trey Lance will miss the game with a sprained left knee but is expected back next week.

Williams' status remains in doubt after he reinjured an ankle that he first hurt during the game against Arizona on Oct. 10. Williams didn't practice the rest of the week after aggravating the injury Monday and is listed as doubtful for the game.

"Trent out of anybody on this team, we'll take up all the way to game time," Shanahan said. "So that's why he's still there."

If Williams can't play, rookie fifth-rounder Jaylon Moore will start in his place. Moore played 22 snaps on offense three weeks ago against Seattle when Williams was dealing with a shoulder injury but could get even more time Sunday.

"Every time he's gone out there, whether it's in the preseason, whether it's been in these practices, the game's not too big for him," Shanahan said. "He gets better the more he plays. And if he does get that opportunity Sunday night, it'll be a hell of opportunity for him and I know he'll be ready."

NOTES: DT Maurice Hurst injured his calf in practice Thursday and will be out four to eight weeks. ... DT Javon Kinlaw (knee) also will miss the game and could go on IR. ... RB Jamycal Hasty (ankle) had no setbacks in practice and should be activated off IR to play Sunday. ... LB Marcell Harris (thumb) is questionable.