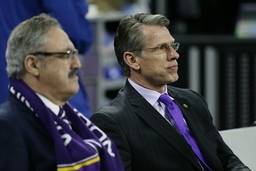 The Vikings are concurrently searching for a head coach after firing Mike Zimmer at the conclusion of his eighth season. The team requested interviews with eight people and has now met with four of those candidates.

Wolf, the son of former Green Bay general manager Ron Wolf, just finished his second season with the Patriots. He spent 14 seasons in various personnel roles with the Packers, but he was passed over for the general manager job there in 2018 when Brian Gutekunst was promoted. Wolf then spent two seasons as Cleveland's assistant general manager.

Cook and Wolf worked together with the Browns, where Cook has spent the last six seasons. Cook, who played linebacker in college at Miami, also worked in scouting for Green Bay and Indianapolis.

Gannon finished his first season with the Eagles after three seasons as a defensive backs coach for the Colts. He spent four seasons with the Vikings under Zimmer from 2014-17 as an assistant defensive backs and quality control coach.