Dolphins clicking on all sides as they head into their bye 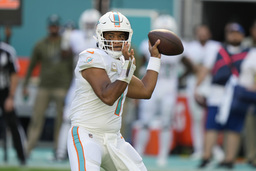 A comeback victory against Baltimore. An upset win over their divisional opponent Buffalo.

Miami's 39-17 rout of Cleveland on Sunday was the dominant win the Dolphins (7-3) needed. And it couldn't have come at a better time as they'll head into their bye week alone in first place in the AFC East after Buffalo lost to Minnesota and fell to a tie with the New York Jets.

Quarterback Tua Tagovailoa's confidence and command of the offense is growing more evident with each game, and it has made the Dolphins nearly unstoppable.

The three highest-rated games of his career have come in the past three weeks, capped by Sunday's performance in which he completed 25 of 32 passes for 285 yards, threw three touchdowns and no interceptions for a 135.0 passer rating.

Tagovailoa hasn't thrown an interception since he returned from a concussion in Week 7, and he said Sunday feels as though he's playing the most consistent football of his career.

McDaniel pointed to Tagovailoa's vision, ball placement and ability to move through his progressions at lightning speed as the reasons for his success.

"That's really making it frustrating for a defensive front," McDaniel said. "You're in pass rush mode and you can't get to them. ... So he is doing a lot of things visually, manipulating defenders, making really good throws and getting the ball out."

The Dolphins are closing in on their first playoff berth since 2016, but they have a tough stretch coming up, with road games against San Francisco, Buffalo and the Los Angeles Chargers.

But first, they'll have a week to rest. And McDaniel really wants them to rest.

"Deliberate practice is a brain drain," McDaniel said. "And in order to do it the appropriate way, you have to have deliberate rest as well. So I'm a leader by example. I'm going to show these guys how to rest my butt off."

The Dolphins' trade for Jeff Wilson looks to be the spark they needed in their running game. His physicality has complemented Raheem Mostert's quickness, and the result was Miami's best rushing output of the year Sunday. Wilson has 26 carries for 170 yards and two touchdowns in two games as a Dolphin.

"I don't know who pisses him off before every game," Wilkins said. "He is a lot of fun to watch, and I'm glad he is on our team."

The Dolphins' special teams gave up a huge play on the opening drive - a 48-yard kickoff return by rookie Jerome Ford - that helped set up the Browns' first touchdown. Miami has had a few special teams gaffes this season, including the now-infamous "butt-punt" against the Bills in Week 3.

Jason Sanders' two missed extra points didn't matter much Sunday, but those points could be a much bigger deal in a closer game or in the playoffs. Sanders is 13 of 17 on field-goal attempts this season and has missed all three of his attempts of 50-plus yards. He has also missed three extra points.

30 - The Dolphins have scored 30-plus points in three straight games for the first time since 2009.

After their week off, the Dolphins will host the Houston Texans on Nov. 27. After that, four of their next five games will be on the road.