Mayfield has urgency to perform well in return for Panthers 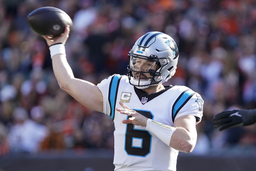 CHARLOTTE, N.C. (AP) Baker Mayfield is running out of time to make a good impression as the Carolina Panthers' quarterback.

The No. 1 overall pick in 2018 needs to stack some quality performances together to offset his poor play earlier this season before becoming an unrestricted free agent in March.

Mayfield returns to the starting lineup Sunday against an old nemesis, the Baltimore Ravens.

Acquired in a trade with Cleveland, Mayfield began the season as the Panthers' starter, but Carolina stumbled to a 1-4 record as he posted one of the league's worst QB ratings while struggling with batted balls at the line of scrimmage.

"It's pretty important to win considering we are in the division race right now," Mayfield said when asked about his long-term future. "I'm not worried about anything else. It will take care of itself as long as I do my job. We will see where it goes. That's how I have handled it."

The reality is that if Mayfield continues to struggle, he could end up as a backup QB next season, with a greatly reduced salary.

He could certainly reverse that trend by playing well against the AFC North-leading Ravens, who beat the Browns in five of Mayfield's eight starts for Cleveland.

Panthers interim coach Steve Wilks has made no promises about who'll start beyond this week. Wilks also said he would want to give Sam Darnold some snaps before considering him as a starter, a possible indication that Darnold could split time with Mayfield on Sunday.

"I'm not worried about it being `my job' because I know what I am capable of and this team does as well," Mayfield said. "I am going to go out there fully confident and ready to win."

In the meantime, Wilks said he wants "consistency" out of Mayfield.

Mayfield looked good in Week 9, coming off the bench to replace a struggling Walker with the Panthers trailing 35-0 at halftime. He led three second-half touchdown drives in Carolina's 42-21 loss.

Wilks stuck with Walker last week against the Atlanta Falcons despite Walker posting a 0.0 QB rating against the Bengals. Walker responded well, leading the Panthers to a 25-15 win.

"I think there were times where, yeah you question it," Mayfield said when asked if he ever thought he'd never get another shot to start in Carolina. "But you always stay ready. That is a cliche thing to say, but that is what you have to do. You have to prepare like you are going to play."

Since Mayfield was sidelined, the Panthers have committed to a run-first attack led by D'Onta Foreman. Carolina is averaging 159.5 yards per game on the ground since trading star Christian McCaffrey to San Francisco.

"We just continue to run the ball really, really well and we just have to be smart when it comes to taking our shots and taking care of the ball," Mayfield said. "I'm excited to get back out there with our guys and try to stack these wins and see where it goes."