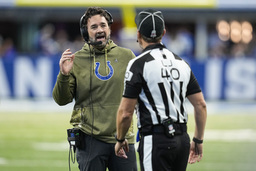 On Sunday, the old problems resurfaced.

One week after winning in Saturday's road debut, the Colts produced the fast start they've talked about all season and a stifling three-quarter performance from the defense - only to see it unravel over the final 15 minutes when the offense couldn't convert scoring opportunities and the defense wore down again.

The result: The Philadelphia Eagles rallied for a 17-16 victory that ruined Saturday's home debut.

"If, if, if - you've got to make plays and when you have opportunities to finish games against really good teams," quarterback Matt Ryan said. "You've got to finish them, and unfortunately, we didn't do that."

Finishing was a problem for Indy (4-6-1) long before Saturday was hired.

The Colts lost their final two games last season to miss the playoffs and had to settle for a season-opening tie at Houston after a missed field goal in overtime.

When they couldn't slow down Derrick Henry and Tennessee in Week 7, Ryan was benched. When they couldn't hold a late lead against Washington in Week 8, offensive coordinator Marcus Brady was fired. And when the Colts got blown out at New England in Week 9, owner Jim Irsay fired Frank Reich and hired Saturday.

The new coach led his team to an impressive Week 10 win at Las Vegas.

How close have the Colts been? They've lost their last two home games, to the Commanders and Eagles, by identical scores and under similar circumstances - unable to rally after giving up TDs in the final 90 seconds.

"When you're leading, you start thinking about, `How did we let it slip away? What were the misfires? What were those plays that were critical that led to us losing the lead?'" said Jonathan Taylor, who rushed for 84 yards and a touchdown.

There was plenty of blame to be shared as Philadelphia (9-1) rebounded from its first loss of the season by overcoming a fourth-quarter, double-digit deficit for the first time since 2010.

The Colts were in position to answer midway through the quarter after Parris Campbell's 31-yard catch set up first-and-goal from Philadelphia's 5-yard line. But a 14-yard sack on third down forced the Colts to settle for a 37-yard field goal and a 16-10 lead.

Hurts delivered again on the next Eagles series, drawing a 39-yard pass-interference penalty against Zaire Franklin on third-and-2. Nine plays later, with Indy's defenders spread out across the field, Hurts took the snap and sprinted untouched between the hash marks for the go-ahead 8-yard TD run.

"Too many mistakes, too many negative plays, missing kicks, you can't play a team that good and give them that many opportunities," Saturday said. "Ultimately, they made one more play than we did."