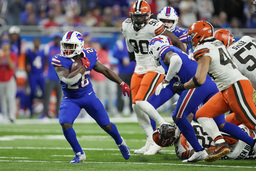 ORCHARD PARK, N.Y. (AP) With Josh Allen misfiring on passes last weekend, the Bills placed an emphasis to lean on their ground game against the Browns.

Devin Singletary approached fellow running back James Cook and issued a challenge to the rookie.

Though both fell short of the imaginary 100-yard finish line by gaining 86 yards rushing each in a 31-23 win against Cleveland on Sunday, Singletary's and Cook's contributions were valuable reminders of how the Bills offense doesn't have to rely solely on Allen's arm or scrambling ability for that matter.

On a day the Bills opened with three-and-outs on their first three possessions, and Allen finished with season lows with 197 yards passing and 7 yards rushing, the running backs raced to the rescue. Their combined 172 yards rushing represented nearly half of Buffalo's 357 yards.

"It's huge," Allen said of the running backs finding traction. "That's going to help us out going forward."

Now it's a question as to whether the Bills (7-3) can continue to find some semblance of balance after snapping a two-game skid while preparing to travel to Detroit to play the Lions (4-6) on Thanksgiving.

Buffalo returns to Detroit for a second time in five days after a major lake-effect storm dumped 7 feet of snow in some places across western New York, forcing the Bills play their "home" game against Cleveland at Ford Field.

It's only a coincidence that Singletary, who's nickname is "Motor," finally got in gear in Motor City with a season-high in yards rushing while scoring his third TD in two games.

"He was running angry, because that `Motor' was going last week," offensive lineman Ryan Bates said of Singletary.

"When he gets his opportunity, he makes the most of it. And when he's one-on-one on the field, he's one of the hardest backs to tackle," Bates added. "He wants the world to know that he's the best running back in the NFL. I know I believe that wholeheartedly, and our whole offense believes that."

The only thing holding Singletary back has been a lack of touches in what's generally been a pass-first offense.

His 18 carries against the Browns represented a season high, and were tied for seventh most in his four seasons with Buffalo.

"I think it was fun not only for me, but for James and our O-line," he added. "It felt good to show that we're able to do that if we need to do that moving forward. Because we know we're going to need everything we got to try to get to where we're trying to get to."

Singletary, of course, was referring to the two-time defending AFC East champion Bills playing to the Super Bowl aspirations they had entering the season.

Cook is a rookie second-round pick whose playing time has gradually increased. Buffalo's backfield also features Nyheim Hines, a fifth-year player who was acquired in a trade with Indianapolis and best noted for his role as a receiver. Hines has mostly been used as Buffalo's primary returner in three games with the Bills.

The renewed focus on the running game has potential parallels to last season. The Bills were in the midst of a midseason slump in which they lost four of seven before they turned to Singletary to provide a spark.

Buffalo closed the season by winning four straight in which Singletary came close to nearly doubling his production with 76 carries for 323 yards rushing and four touchdowns.

Coach Sean McDermott declined to make comparisons to last season, and yet re-emphasized a point he began making a year ago in stressing the importance of playing physical football.

"There are some strides that I felt like we made in the game, being able to grow our offense in the way of running the ball effectively," he said. "You got to have a physical component on your offense. But that doesn't have to just be the running game."

Singletary is ready for whatever's asked of him.

"It all comes down to everybody doing their part. And when your number is called, whatever it is that you need to do, you execute at a high level," Singletary said. "If you don't have confidence, you don't have nothing, so I'm very confident."