Titans go with undrafted rookie kicker with Bullock out 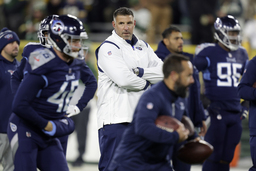 The Titans activated Shudak off the physically unable to perform list Saturday while downgrading Bullock from questionable to out against the Bengals. Shudak, the undrafted rookie free agent out of Iowa, returned to practice Wednesday after he hurt his right, kicking leg at the end of the offseason program.

Tennessee (7-3) tried veteran Josh Lambo in its 27-17 victory at Green Bay on Nov. 17, then waived Lambo on Tuesday after he missed an extra point off the right upright in that game. Bullock hurt his leg in pregame warmups before a win over Denver on Nov. 13.

The Titans also elevated defensive back Greg Mabin and linebacker Andre Smith off the practice squad.