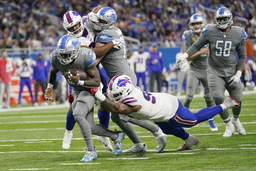 With Miller out indefinitely with a knee injury, his teammates are looking to repay the favor.

"We've got to hold together," defensive tackle Ed Oliver said. "Von did the same thing for us."

It's been that kind of year for the Bills defense, which has dealt with several injuries.

The Bills (8-3) have found a way to persevere because of their depth on defense and their ability to score on offense, but they know Miller's absence presents a new challenge. The standout pass rusher was injured in Buffalo's 28-25 win over the Detroit Lions on Thanksgiving and Miller has been ruled out for Thursday's game against the New England Patriots.

"He's a future Hall of Famer for a reason," Bills coach Sean McDermott said. "That said, we've got to move forward."

Injuries have affected every position group on the defense for Buffalo this season.

The Bills opened the season with a banged-up secondary. Top cornerback Tre'Davious White missed the first 10 games of the season as he made his way back from a torn ACL. White played for the first time on Thanksgiving with limited snaps and could receive more playing time against New England. Safety Micah Hyde is out for the year with a neck injury, safety Jordan Poyer missed games on two separate occasions with an elbow injury. And cornerbacks Christian Benford, Cam Lewis and Dane Jackson have also been injured. Benford was placed on injured reserve on Saturday with an oblique injury.

At linebacker, Tremaine Edmunds has missed Buffalo's past two games with groin and heel injuries and Matt Milano has missed time with an oblique injury.

On the defensive line, the news isn't all bad for Buffalo - Miller is out, but others are returning. Buffalo's other starting defensive end, Greg Rousseau, practiced Wednesday after missing the previous three games with a high ankle sprain. A.J. Epenesa is getting closer to returning from an ankle injury as well.

Buffalo's defensive tackles in particular are looking to help pick up the slack with Miller sidelined. Oliver, Tim Settle and Jordan Phillips all dealt with injuries earlier this season, but have been rounding into form as of late.

"Me, Tim, (Phillips) and (DaQuan Jones) are all healthy," Oliver said. "The inside four are all healthy so that just means that our role has to just increase. I know we're banged up on the edges, but all four of us are healthy. So between the four of us we can get it done."

As a group, Buffalo's defensive tackles have shown tremendous improvement over the past two weeks. After being gashed in the run game in three consecutive weeks, the Bills held Cleveland's Nick Chubb to just 19 yards in a 31-23 victory and they contained both Jamaal Williams and D'Andre Swift on Thanksgiving.

Oliver, in particular, has been a standout as of late. He had one of his best games of his career in the win over the Lions, getting a safety and both forcing and recovering a fumble.

"He finished the season so strong for us a year ago and he kind of set a standard," defensive coordinator Leslie Frazier said. "And then he had a high ankle sprain after the first game and missed a lot of time. It took him a bit to get back. But he's getting to that point now and based on (Thursday) he's getting back to the standard for sure where he's making those splash plays time in and time out, which is what we need from him and a few of our other guys as well - especially in the absence of Von."

The Bills know they will miss Miller, but they also know they've shown the ability to overcome key injuries on defense.

"It will be a big loss," Frazier said. "I'm not going to sit here and sugarcoat that and say it's not. He's a very important cog in what we do. But it also means that provides an opportunity for someone else. We just need the other guys to step up and make plays when they have an opportunity to make plays."