Giants, on a roll, aim to sweep Rockies with NL West title in sight 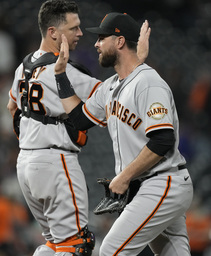 The San Francisco Giants expanded their lead in the National League West standings Saturday night with a win over the Colorado Rockies in Denver.

Sunday, the Giants go for the series sweep at Coors Field while also attempting to continue to hold off the Los Angeles Dodgers for first-place in the division.

San Francisco (101-54) enters Sunday with a two-game lead atop the NL West with seven games remaining. The game is the Giants' final matchup of the season against the Rockies (71-83), and they have won 14 of the first 18.

A loss Sunday would give the Rockies their worst record against San Francisco in a single season. Colorado has lost five of their past six games overall, including a pair of 7-2 defeats to open the series with the Giants.

San Francisco set a franchise record for most home runs hit in a single season Saturday night as Brandon Belt hit two to give the Giants 236 for the year.

With 101 wins, the Giants are closing in on a franchise record that has lasted more than a century. The 1904 New York Giants won 106 games.

Brandon Crawford said Friday night that the way the Giants are playing, they could run the table.

If San Francisco were able to do that -- the Giants return home Tuesday and have three games each left against Arizona and San Diego -- it would roll into the postseason as division champs.

Said pitcher Alex Wood: "I don't want to take anything away from us winning 100 games and 100-plus games ... We've got bigger fish to fry. It's a great accomplishment, but we're looking for more."

Gausman faced San Diego in each of his past two appearances, taking a loss and a no-decision.

On Tuesday, he left trailing the Padres 4-1 after giving up four runs off nine hits in four innings, with three of those hits leaving Petco Park. It was the shortest outing for Gausman since he went 3 2/3 innings in Oakland on Aug. 21.

Gausman pitched against the Rockies on Labor Day, getting the win after giving up three runs on five hits in seven innings. He is 2-1 with a 4.76 ERA in five starts lifetime against the Rockies, striking out 35 in 28 1/3 innings of work.

The Rockies will start righty Antonio Senzatela (4-9, 4.14), who is making his career-high 27th start of the season -- but first against the Giants.

In Senzatela's previous start last Tuesday against the Dodgers at Coors Field, he did not factor into the decision in the 5-4 loss. He gave up four runs off seven hits through six innings.

In nine appearances and seven lifetime starts against the Giants, Senzatela is 5-1.

Manager Bud Black will be looking for Senzatela to eat up some innings after Saturday's starter, Jon Gray, was pulled after 4 2/3 innings.

"I think the simple answer, as far as not getting past the sixth, is that there are some mistakes in there that have cost him, where we've had to [take him out] of the game based on the score," manager Bud Black said of Gray's tough stretch, in which he has not lasted six innings since Aug. 4.