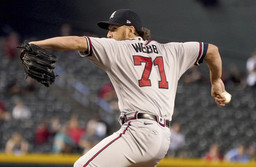 "You have go have a short memory," Braves manager Brian Snitker said. "We came in here to win the series and we did that."

Arizona, which began the day tied with Baltimore for the major leagues' worst record at 48-104, announced before the game that Arizona manager Torey Lovullo was given a one-year contract extension through 2022.

"In a game we were getting pushed around my their starting pitcher, we withstood the strain," Lovullo said. "They fight. They unite. They stay focused."

Austin Riley homered for the third straight game as the Braves took a 3-0 lead off Madison Bumgarner with a three-run third. Dansby Swanson's sacrifice fly boosted the lead to 4-1 in the sixth.

Josh VanMeter and Ildemaro Vargas singled to open the seventh off Charlie Morton, Jacob Webb (5-4) relieved and Kelly hit his second pitch for a 376-foot homer to left field, his 12th this season.

"Today I just didn't have my stuff," Webb said. "It doesn't make it easier, but you have to bounce back."

Bumgarner, who no-hit the Braves in a 7-0, seven-inning victory April 25, gave up three runs and five hits in five innings, with five strikeouts and two walks.

Sean Poppen (1-0) pitched a scoreless seventh inning for his first major league victory. J.B. Wendelken pitched a 1-2-3 ninth for his second save.

Travis d'Arnaud lined Bumgarner's 24th pitch for a single to left field with two outs in the second inning, halting Bumgarner's no-hit steak against Atlanta at 8 2/3 innings. Bumgarner's April win is not classified as a no-hitter because it lasted only seven innings under pandemic rules.

FOUR OF A KIND

The quartet accounted for seven homers, 21 runs and 22 RBIs in the four-game series. Riley had three homers and Albies had two.

Albies' RBI double in third inning was upheld after a video review. Replays showed that a fan reached over the left field fence and touched the ball with his hands as David Peralta attempted to make the catch, but the hit stood.

Albies got his 101st RBI a day after he became the youngest second baseman in major league history with a 30-homer, 100-RBI season.

Braves: Adam Duvall left the game in the last of the seventh, when Eddie Rosario took over in right field.

Atlanta will play twice in San Diego on Friday, first finishing a July 21 game that was suspended after a lengthy rain delay in Atlanta with the Padres leading 5-4 entering the top of the sixth. Left-hander Max Fried (12-7) is to start the regularly scheduled game.

Arizona RHP Humberto Castellanos (2-1) will oppose Los Angeles RHP Tony Gonsolin (3-1) in the opener of a three-game series at Chase Field. The Dodgers have won 14 of 16 in the season series.