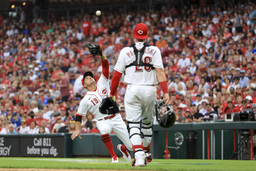 CINCINNATI (AP) Max Fried is making his case for an All Star Game roster spot along with a bunch of his teammates.

Fried won his eighth straight decision following a loss in his first two outings, allowing one run over seven innings in Atlanta Braves' 9-1 rout of the woeful Cincinnati Reds on Friday night.

"Just kind of embracing who I am as a pitcher," Fried said. "Just trying to mix speeds and get soft contact and not always chase a strikeout."

Although Fried acknowledged he didn't have his best stuff, the Reds were no problem. He gave up five hits with four strikeouts and no walks. After allowing Tommy Pham's RBI single in the third, Fried retired 10 in a row and 11 of his last 13.

Austin Riley put Atlanta ahead to stay with his team-high 19th homer, a two-run shot in the first inning. Dansby Swanson added a three-run homer for the Braves, who are 22-6 since the start of June and 3 1/2 games behind the NL East-leading New York Mets.

"Their lineup took over the game," Reds manager David Bell said. "You have to look at what Fried did for them. He really was able to shut us down."

Ronald Acuna Jr., the top All Star vote-getter in the National League, was back in the Braves lineup after fouling a pitch off his left foot last Saturday and missing four games. He went 2 for 3 as a designated hitter and was hit by pitches twice.

Riley hit a two-run homer in the first off Mike Minor (1-5), Riley's first long ball since he hit two against Washington on June 15. Riley added a run-scoring single in the ninth against Jeff Hoffman.

Minor allowed two runs and six hits in six innings, his first quality start this season. Atlanta piled on seven runs off Cincinnati's bullpen, which entered with a 5.69 ERA - nearly a run higher than any other team. Swanson homered off Joel Kuhnel.

"With the bullpen we have to keep working with our guys, stay with them," Bell said. "This game is tough and it seems like an eternity when you're going through it, but it can turn around in a hurry."

In the eighth, Adam Duvall had an RBI double and Orlando Arcia hit a two-run single against Luis Cessa.

"Mike was doing a good job against us, keeping everybody off balance," Braves manager Brian Snitker said. "This is one of them ballparks you never feel comfortable. It's like you just got to keep scoring because you never really feel good about any kind of a lead here. Seen a lot of them vanish over the years, so that was nice we kept adding on."

Cincinnati has lost nine straight at Great American Ball Park and is an NL-worst 26-50. It's the worst home losing streak at the stadium, which replaced Riverfront Stadium/Cinergy Field in 2003. The Reds lost eight straight at home in 2015 and nine straight in May-June 2001 at the old stadium.

The Reds expect to remove LHP Nick Lodolo (back strain) from the injury list and hand him the start Tuesday against the Mets. He's been out since late April.