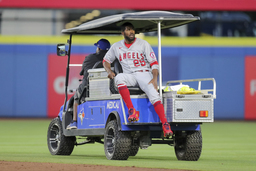 A date for the procedure has not been set. Recovery time is expected to be six to nine months.

"Comeback season has commenced," Fowler said Sunday. "The cards I've been dealt, so you've got to deal with them and go at it like that."

Fowler was hurt when he took an awkward step on second base in Friday night's game against Toronto. At first he thought he was hit by a thrown ball.

The Angels initially thought Fowler had avoided a serious injury but an MRI exam on Saturday found the tear.

"The preliminary tests were fine," Fowler said. "Thought the ACL and everything was fine, and then woke up the next morning and it was kind of sore. ... Went and got an MRI and the doc told me that I tore my ACL and my medial meniscus and strained my MCL."

"I want to continue to play," the 35-year-old said. "I think I've still got a lot left in the tank. Right now I just want to get the knee back right and get going again."

Los Angeles manager Joe Maddon talked with Fowler on Sunday and said he took the situation as well as can be expected.

He said Jose Rojas and Juan Lagares will play in right field in the near future. It is possible that Jared Walsh could see some playing time there as well.

Third baseman Anthony Rendon was not in Sunday's lineup against the Blue Jays. Maddon said Rendon felt something in his groin while making a throw Saturday night.