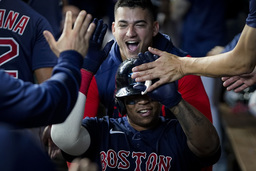 The Boston Red Sox became the first team with two grand slams in a postseason game Saturday in Game 2 of the AL Championship Series against the Houston Astros.

Perhaps as noteworthy: they only needed two innings to do it.

J.D. Martinez made it 4-0 with his shot off rookie Luis Garcia with two outs in the first.

Rafael Devers doubled the score with his slam that sailed just fair against Jake Odorizzi with one out in the second after Garcia exited with right knee discomfort.

It's the fourth time in major league history, including the regular season, that a team hit a grand slam in both the first and second innings. The Red Sox have done it twice, also on Aug. 7, 1984.