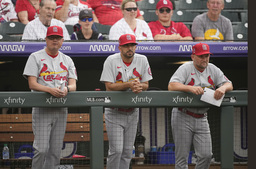 As Oliver Marmol transitioned into a coaching career with the St. Louis Cardinals, it became clear he had the potential to become a big league manager one day.

That day has arrived - a little earlier than expected.

The 35-year-old Marmol was promoted from bench coach to the majors' youngest manager on Monday, taking over the Cardinals almost two weeks after Mike Shildt was fired in a surprise move by one of baseball's most stable franchises.

"I really felt like Oli was going to be a major league manager at some point. I did not think it was necessarily going to be 2022," said John Mozeliak, the president of baseball operations for the Cardinals.

Marmol is the team's youngest manager since Marty Marion at age 34 in 1951. Marmol, a New Jersey native who traces his lineage to the Dominican Republic, also becomes the franchise's second minority manager. Cuban-born Mike Gonzalez managed the team for parts of the 1938 and 1940 seasons.

"Some of the neighborhoods we lived in early on ... these opportunities don't come across the table to the majority of the people that grew up like that," Marmol said. "For them to be able to identify and see someone of color in a position of leadership, especially for a franchise, a winning franchise, one with a history that the St. Louis Cardinals has, is extremely meaningful."

Marmol was picked by St. Louis in the sixth round of the 2007 amateur draft out of the College of Charleston, but his playing career stalled at Class A Palm Beach. After coaching and managing in the minors, he joined the Cardinals' major league staff in 2017 as the first base coach.

He spent the past three years as the bench coach under Shildt, helping St. Louis to three consecutive postseason appearances. The Cardinals used a 17-game win streak in September to move into playoff position, but they lost 3-1 to the Dodgers in the NL wild-card game.

As late as the flight back from Los Angeles, Mozeliak didn't think the Cardinals would be making a change at manager. But Shildt, 53, was fired Oct. 14 over what Mozeliak described as "philosophical differences" between Shildt, the coaching staff and the front office.

"We had internal issues we felt we could not resolve," Mozeliak said. "We felt the best path forward was to make a change for the organization, regardless if it was not a popular one. We did not take this lightly."

After Shildt was dismissed, Mozeliak mulled over going outside the organization versus staying internally. He settled on Marmol, looking for continuity and counting on him to build on what he learned from mentors like Shildt.

"Oli's going to have his own voice. He's going to be able to put his own fingerprints on this," Mozeliak said. "Ultimately you hope and expect that he learned to do things in his own way, and one that he has a lot of confidence in."

Marmol sounded some of baseball's most popular notes on his first official day in his new role. Asked about the modern manager, Marmol described a collaborative process with departments throughout the organization.

"There's just so much information at hand that can be used and when you work in a collaborative manner with the front office and your analytics department, it allows you to get feedback on are the decisions you're making sustainable over 162 (games)," he said.

Marmol said he had conversations with Cardinals owner Bill DeWitt Jr., Mozeliak and general manager Mike Girsch that produced "complete clarity" when it comes to their expectations for the position.

When Marmol got the job, he talked it over with his wife, Amber, and they were excited about the opportunity. But Marmol said he had some mixed emotions because of his relationship with Shildt.

"It was good to be able to, once everything got cleared up and we came to terms, to have that conversation with Mike and receive his support for moving this organization forward," he said.

Marmol takes over a club that expects to contend again after finishing second in the NL Central behind Milwaukee. Adam Wainwright and Yadier Molina, both older than their new manager, are signed for next season, and key sluggers Paul Goldschmidt and Nolan Arenado are expected to help anchor the lineup.

"A championship is the goal, and anything less than that, it is a disappointment," Marmol said. "This year, in 2022, is no different.

Jay Cohen can be reached at https://twitter.com/jcohenap