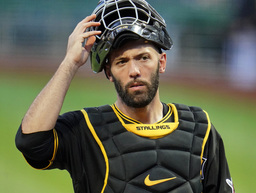 The Marlins acquired Stallings from the Pittsburgh Pirates on Monday in exchange for pitcher Zach Thompson and prospects Kyle Nicolas and Connor Scott.

Stallings, 31, is coming off the best season of his career. He earned his first Gold Glove for his handling of an inexperienced pitching staff that ranked among the worst in the major leagues while hitting .246 with career-highs in home runs (8) and RBIs (53) in 112 games.

Stallings joins a team that is trying to elbow its way into contention in the NL East. Miami signed outfielder Avisail Garcia to a five-year deal worth $56-million and agreed to terms with pitcher Sandy Alcantara.

Stallings finds himself going from handling a staff that pitched to a 5.08 ERA - 28th in the majors - to one that posted a respectable 3.98 ERA and is anchored by Alcantara.

Pittsburgh is in the middle of a franchise-wide reboot focused on hoarding as many prospects as possible. Nicolas and Scott, both 22, fit that mold.

Nicolas, a right-handed pitcher, made 21 appearances between Class A and Double-A in 2021 and struck out 136 batters, the most among players in Miami's minor-league system.

Thompson, originally drafted by the Pirates in the 48th round of the 2011 draft, went 3-7 with a 3.24 ERA in 75 innings for Miami in 2021. He began the season as a starter before shifting to the bullpen in September.

Gamel had been eligible for arbitration.