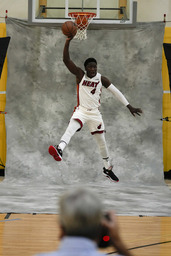 MIAMI (AP) Kyle Lowry posed for pictures with new Miami Heat teammates Bam Adebayo and Jimmy Butler. He chatted up some new teammates for the first time. And he struggled a bit trying to remember the names of various people he was meeting, a task that proved challenging since most were wearing masks.

The first day at his new job wasn't easy.

The second day, that'll be more to his liking.

Lowry went through media day in Miami for the first time Monday, the gamut of interviews and photos that serves as the precursor to training camp. The actual playing of basketball with the Heat starts with the first practice on Tuesday, and that's the part Lowry expects to be seamless.

"It's a different uniform, different city, different atmosphere, different people around," Lowry said. "So, yeah, there's definitely adjustments and kind of figuring things out. It's a little bit different when people have a mask on so you don't know who's talking to who and you don't know the names. It's different for me and my career, but it's the next chapter to be written."

Lowry comes to Miami after 15 years in the NBA, the last nine with Toronto, where he was a six-time All-Star and helped the Raptors win the 2019 championship. He was nearly traded to the Heat last spring, then ended up in Miami this summer during free agency after agreeing to a deal that ultimately became a sign-and-trade sending Goran Dragic and Precious Achiuwa to the Raptors.

"Kyle is somebody that we've had great respect for," Heat coach Erik Spoelstra said. "Just an incredible competitor. ... He's just a great winner. He knows how to impact winning."

Lowry has logged nearly 30,500 minutes of playing time, 11th-most among active players. He never expected to play 16 seasons - and counting - yet even at 35 years old now the Heat believe he was worth $85 million over the next three years.

"I feel so good," Lowry said. "I'm going into another year. I'm going into Year 16; not many people could say that. Playing for an organization like this and playing with some players like this, our goal is to win a championship. And that's the only goal there should be."

There is no timetable for the return of guard Victor Oladipo, who came to the Heat at the trade deadline last spring but ultimately needed another surgery on his now-twice-repaired right quadriceps tendon. "I want to show my resiliency and have one of the best comeback stories ever," Oladipo said.

Shooting guard Tyler Herro's weight gain over the offseason - about 10 pounds of muscle - was at Miami's request, Spoelstra said. "Tyler was committed to the process," Spoelstra said.

Monday marked exactly one year since Miami's 125-113 win over Boston in Game 6 of the 2020 Eastern Conference finals, a victory that sent the Heat into the NBA Finals against the Los Angeles Lakers. There have been 24 players who have played for the Heat since that game, not counting the nine others who were officially in Miami uniforms for the first time Monday at media day.

Most NBA teams are playing four preseason games, a handful of others play five and Miami is playing six. Spoelstra said that is in part due to pre-existing agreements for games that couldn't be played last season because of the pandemic and scheduling limitations. Memphis and the Lakers also have announced six preseason games for the coming weeks.

Adebayo said he took some time off to recover physically and emotionally after helping the U.S. win a gold medal at the Tokyo Olympics. "You want to enjoy it for a little bit. ... That was my moment, that was my time to really soak it in and enjoy it," Adebayo said. "Great for me, great for my family, great for the city of Miami. All in all, a great experience and got it accomplished."