In familiar position, Lightning look to close out Rangers 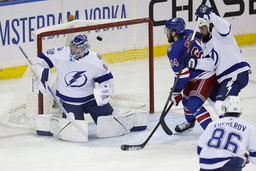 While the host Tampa Bay Lightning head into Saturday's Game 6 of the Eastern Conference finals looking to repeat history, the New York Rangers are attempting to experience deja vu of their own.

The Lightning, who hold a 3-2 lead in the series, can claim an 11th consecutive playoff series and reach the Stanley Cup Final with the opportunity to win a third consecutive championship.

Even though they're facing a Herculean task, the Rangers have one advantage going for them: They have trailed 3-2 in all three rounds this year and are 5-0 when facing elimination.

"We're playing pretty good and it's a really, really tight series so we just have to make that extra play at the end of the game to be the difference," New York forward Andrew Copp said.

The Rangers won the first two games of the series and were within a period of moving that to a 3-0 series edge. But suddenly they have lost three in a row to the Lightning, the latest a 3-1 comeback in which Ondrej Palat netted Tampa Bay's game-winning goal with 1:50 remaining in regulation.

The Lightning have all the momentum along with home-ice advantage heading into Saturday's clash, but don't expect the Rangers to pack it in.

"It'll be a battle. They're a good hockey team, that's why they're the Stanley Cup champs," New York coach Gerard Gallant said. "We're going to have to go in there and play our best game and win a game to give ourselves a chance for Game 7."

Notably, Game 7 would be back in New York's Madison Square Garden.

The Lightning, who snapped New York's eight-game home winning streak on Thursday, have won six straight home games. Two of their three wins this round have come on late goals by Palat, who became the first player in NHL history to score a playoff game-winning goal in the last two minutes twice in the same year. The Lightning also scored a late winner against the Florida Panthers last round.

"If you're going to go this far, some fortunate things have probably happened to you, some bounces have gone your way," Tampa Bay coach Jon Cooper said. "There's been times they haven't gone our way, but, like I've said about the group, we've been through these games and you're not going to win them all. But there's a mindset with the group, especially about not changing the way we play. ... We're just trying to play to the end and, fortunately, the puck had eyes for us."

The Lightning have an 8-2 record of closing out a series that they lead 3-2. The Rangers have a 7-19 mark when trailing by that margin.

The Lightning have the upper hand and deserve it with the way they played the last three games.

"We didn't like our first two games for sure," captain Steven Stamkos said. "Very uncharacteristic plays and just sloppy hockey."

That said, they know the Rangers will throw all they have at them on Saturday.

"We expect their best game of the playoffs, but we expect ourselves to be at that level too," defenseman Victor Hedman said. "We've been successful when we've had the opportunity to eliminate teams, and now we have the chance again. ... "We've got to execute like we have in previous games."

The Lightning could get a boost from the return of center Brayden Point, who has been sidelined since Game 7 of the first-round series with a lower-body injury. Cooper said Point will be a game-time decision if he is able to participate in warm-ups.