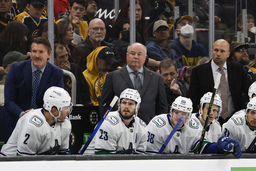 The Vancouver Canucks will try to win consecutive games for the second time this season when they host the Los Angeles Kings on Friday night.

The Canucks, which opened the season with seven straight losses, ended a three-game skid on Wednesday with a 5-4 win against the Buffalo Sabres. The victory in Buffalo closed a forgettable road trip for the Canucks, who have been feeling internal heat from president of hockey operations Jim Rutherford after he told reporters earlier this week that "something has to be fixed."

That "something" has reportedly been the job status of Canucks head coach Bruce Boudreau, who appears to be coaching to keep his job.

Boudreau watched uneasily in the game against Buffalo as the Canucks' lead started to evaporate and it looked like another loss could be looming for a team on a slide.

"It wasn't that we stopped playing, but we started watching and wanting to be too safe, and you can't do that," Boudreau said. "The last thing you want them to do is say, 'Uh oh, here we go again.'"

Things have been much rosier for the Kings, who enter Friday's game second in the Pacific Division and have won seven of their last 10.

Los Angeles defeated the Edmonton Oilers 3-1 on Wednesday night on the strength of a hat trick from Trevor Moore.

"It was kind of funny, I didn't feel like I had my best tonight," Moore said after the game. "It was just kind of one of those games where the puck finds you, or I should say my linemates found me, so it was good to get those bounces out there."

Kings goalie Cal Petersen made 22 saves in that victory. It was his fifth win of the season in his seventh start.

The Kings have been led offensively this season by Kevin Fiala, who has 18 points in 19 games. Moore and Gabriel Vilardi both have 15 points this season, while Kings captain Anze Kopitar continues to defy the aging curve with 14 points.

Jonathan Quick has gotten the majority of the starts in net for Los Angeles this season, but he allowed six goals in his last outing against the Calgary Flames. Petersen, who the Kings have been trying to establish as Quick's successor, could be in line for another start after his showing in Edmonton.

Vancouver's goaltending has been reflective of its overall record -- spotty and inconsistent. Thatcher Demko has been the Canucks' starter in usage, with 11 starts, but he has just one win and has been outplayed by Spencer Martin, who was in net for the win against Buffalo.

Canucks captain Bo Horvat is tied for the team lead with 20 points with Elias Pettersson. Despite missing time due to injury, defenseman Quinn Hughes leads Vancouver with 14 assists in just 13 games.

The contest is the first game of a back-to-back for the Kings, who will play the Seattle Kraken on Saturday night.