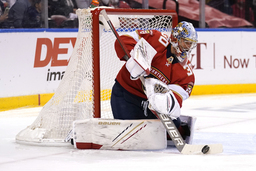 Thing is, it's just not apparent to Knight yet.

Set to begin his first full pro season, Knight is tuning up for training camp by going through a development camp with the Panthers that ends Tuesday and a showcase tournament that will be hosted by the Tampa Bay Lightning this weekend. And he's viewing the pre-camp work as just another step in his process, even after making a meteoric rise up the depth chart last season.

"Frankly, I don't really look at myself as having made the team or am making the team," Knight said at camp this week. "I think I need to still prove to myself that I can do this every single day, because I never really want to have that sort of comfort that I've already made the team. I think it's good to kind of push myself and say to myself that I still need to prove to everyone that I'm still capable of doing what I did."

And he did plenty.

Knight joined the Panthers after his season at Boston College ended and the original plan was for him to play in one game, just to get him some experience. The plan changed. Knight went 5-1-0 in six appearances, five of them starts, the last two of those coming in the playoffs when the Panthers needed a spark after Sergei Bobrovsky and Chris Driedger struggled against Tampa Bay -- the team went on to win its second consecutive Stanley Cup.

Knight's final numbers last season: a .925 save percentage with a 2.23 goals-against average. His work in development camp has also been impressive.

Driedger is gone now, picked by the Seattle Kraken in the expansion draft. Bobrovsky still has five years left on his contract with an average annual value of $10 million, though it wouldn't be a surprise if the Panthers say the starting job is up for grabs entering camp.

That's how highly they think of Knight, who helped USA Hockey win a gold medal at the world junior championships earlier this year before finishing his college career and joining the Panthers.

"My mindset is anyone can win one game," Knight said. "Anyone can win a playoff game. I think you've just got to do it consistently. I think that's what the best people do. They do it every single day."