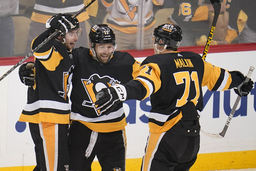 PITTSBURGH (AP) Bryan Rust felt he deserved a raise. He just didn't necessarily want one so big it would jeopardize his chances of staying in Pittsburgh.

Sure the versatile Pittsburgh Penguins forward had a sense of what his worth would have been on the open market. Ultimately, however, staying in the place where he met his wife, had his son and won two Stanley Cups trumped whatever curiosity he might have felt about exploring his options elsewhere.

If that means the six-year deal worth $5.125 million annually he signed late Saturday night just shortly after wrapping up son Hunter's first birthday party came on the cheap in a manner of speaking? So be it.

"I think our mindset was getting something done in Pittsburgh and if there was a little bit of it discount taken, I guess there could have been," Rust said Sunday. "But we're happy here. This is a number that we're really happy with."

The 30-year-old who helped the Penguins to back-to-back championships in 2016 and 2017 also knows that sticking around for a reasonable rate for a player coming off a 24-goal, 34-assist season could give Pittsburgh a little more flexibility as it prepares to tackle what could be a thorny offseason.

Longtime Penguins Evgeni Malkin and Kris Letang are scheduled to become free agents for the first time in their careers in July. While both have said they'd love to stay with the only team they've ever played for, it's ultimately going to come down to money. Rust signing a team-friendly deal could be a sign that new owners Fenway Sports Group is considering keeping the band together.

"As a team, as a player on this team, we obviously would love to have those guys back," Rust said. "They're two unbelievable players, two Hall of Famers ... (My signing) shows (the new owners) want to win and we're not going to change our mindset."

The Penguins have reached the playoffs in 16 consecutive seasons, the longest active streak in North American professional sports. Rust has been a fixture during the second half of that run and is now focused on remaining one in Pittsburgh for perhaps the entirety of his career.

"I think the opportunity to have that happen, it's cool," Rust said. "I think a lot of pride comes with being able to say you played with one organization for most, if not all, of your career. And I think that definitely played into a little bit of a factor when making this decision."

And yes, Rust is totally fine if the team uses the money it saved toward keeping Malkin and Letang or bringing in other players who want to team with captain Sidney Crosby, who said last week he plans on playing at least three more seasons.

"I think if that helps sign some other guys that would like to be here and would like a chance to win with this team, I think that's awesome," he said.

A third-round pick in the 2010 draft, Rust made his NHL debut on Dec. 13, 2014. Since his arrival, only Crosby, Malkin and Jake Guentzel have scored more for the Penguins than the 124 goals he's piled up in 424 games.

While Rust understands there is pressure that comes with getting a pay bump, he believes he's prepared to live up to the raised expectations.